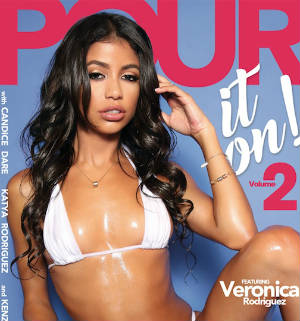 Directed and captured by MimeFreak, Pour It On! Volume 2 hits it hard with four stunning babes and their oiltastic adventures. Petite, fiery Latina Superstar Veronica Rodriguez graces the cover in a white bikini, all oiled up and ready to go. Bootylicious blonde Candice Dare makes her ArchAngel debut. Mexican/Venezuelan Katya Rodriguez is also an Archangel first-timer and brings a double dose of Latin flavor to the oilgasmic adventures. And, fan-favorite busty blonde Kenzie Taylor gets an unforgettable slippery ride. Pour It On! Volume 2 streets today and is available at your local adult store and favorite online e-tailers.

“I was truly honored to be able to film Veronica’s last boy/girl scene,” says General Manager and Director MimeFreak. “She’s an amazing performer and the scene was incredible. When I originally came up with the concept for the series, she was whom I had in mind.”

Watch the trailer for Pour It On! Volume 2 and get the latest ArchAngel news on The Archangel Blog.

At ArchAngel’s official site ArchangelVideo.com, members get to see Veronica Rodriguez’s first ArchAngel scene there, along with all the scenes from the original Pour It On!

Webmasters can promote all Archangel Video by joining up with ArchangelDollars.com, their official affiliate program.