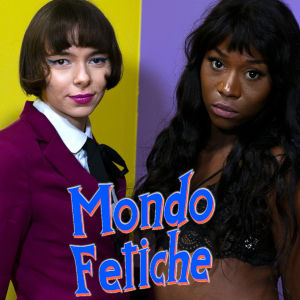 Launched by mainstream filmmaker Carlos Deth, who previously worked as an editor and producer in reality TV, documentaries, branded content and commercials, with the goal of forging a creative love affair between modern kink and vintage cult cinema, Mondo Fetiche delivers an eye-popping array of colorful scenes and scenarios starring the industry’s most respected fetish performers.

“There are some amazing fetish content sites out there, but I wanted to shoot erotica for fans of arthouse and independent films,” said Deth. “Rebellious with a campy sense of humor, a retro color palette and a bit of shock value to it.”

Mondo Fetiche currently offers 15 original scenes to entice viewers – one of its short films, Spanked for Staring, starring Veronica Vixen and Charlie Kicks, is screening at New York City’s Cinekink later in March – as well as one brand-new movie release each month, available for streaming or download.

“It takes an artistic sensibility to bring that colorful representation of sexuality and fantasy to life.”

Art/kink erotica production studio and website Mondo Fetiche is the brainchild of Carlos Deth, an Argentinian filmmaker working in New York City. The Hampshire College Film Studies graduate made a career as a producer and editor of mainstream commercial work, reality television and documentaries.