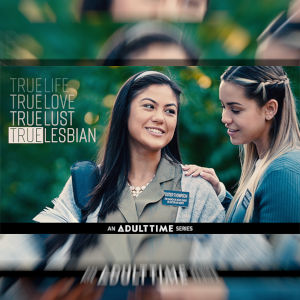 Touting the slogan ‘True Life. True Love. True Lust. True Lesbian’, the story-driven anthology series is the first project Adult Time has chosen to release under its new “Girlsway Presents” label, a monthly premiere event that will debut a new original lesbian project for Girlsway’s massive audience. If the projects perform strongly, they may open the door for further series development by Adult Time.

“After seeing the success of Adult Time’s Teenage Lesbian, the award-winning film based on my own coming-out story, I decided to expand upon the concept of realist erotica with the True Lesbian series,” said Adult Time Chief Creative Oficer Bree Mills.

“Each episode in this initial trilogy tackle real lesbian experiences, and will be offered as both mainstream shorts on YouTube and uncensored featurettes within Adult Time,” said Mills. “I felt there was no better way to debut this new series than to also offer it as the first premiere on Girlsway, the lesbian brand where my own journey as a writer and director began!”

True Lesbian is available at Girlsway.com and the Adult Time platform at AdultTime.com, home to the most extensive catalog of award-winning content – with access to over 200 channels, 60,000 scenes and 5+ new releases per day – in one subscription.

Affiliates can make real money by signing up with the montreal webmaster program, FameDollars.com.