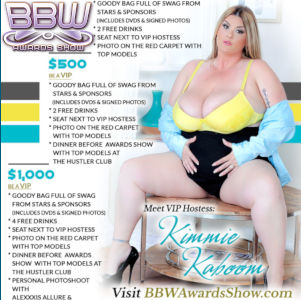 Limited VIP tickets are still available starting at $100 and going up to $1000. There are four tiers that offer different perks, including goodie bags, free drinks, dinner before the show at Hustler Club, photos on the red carpet with top models, and a personal photo shoot with Eliza Allure and Alexxxis Allure. VIP is the only way to go, as all the general admission tickets are sold out. Find out more at https://bbwawardsshow.com/vip/.