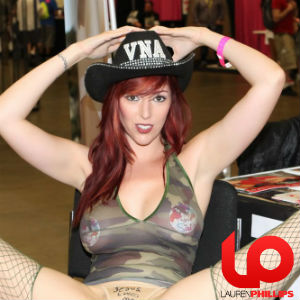 Phillips’s Official Site has an all-new tour, promo video and members area, and is 100% mobile friendly (members can watch and stream any of the content and camshows on their phones). As part of the VNA Girls Network, members get free live daily camshows as well as 29 Official VNA sites free (including the official sites of girls like Julia Ann, Nikki Benz, Jelena Jensen, Sara Jay, Vicky Vette, Sunny Lane and more).

To kick off the new site Lauren was live for her members on Sunday, December 11 at 7pm est (12pm gmt – 9pst), and plans to repeat the event regularly.

Originally from New Jersey, Phillips got her start in adult webcamming after she moved to Florida. She decided to break into hardcore and moved to Los Angeles where she is represented by Nexxxt Level for shoots.

Phillips has shot Wicked, Evil Angel and Devils Film among others. She won her first award in October at the Nightmoves Show (Miss Congeniality), and just picked up her first- ever AVN nominations for the upcoming AVN Awards Show (Best VR Scene and Best Group Sex Scene).

A trained dancer, Phillips is looking to feature more in the coming year.

“I can’t think of a better birthday present than the launch of my site,” Phillips said. “It’s been a massive labor of love. I first met Vicky in Atlantic City at Exxxotica when I was first breaking into adult two years ago, in 2014. I stayed in touch, shot with Vicky, and cammed on her network through my old site. It was time to take my Official Site to a new level for my amazing fans. I am thrilled to be part of the VNA team. I personally worked on the design, logo and customized the site myself. I think my fans are going to love it! I have all kinds of kinky shoots planned now that the site is live. I am working hard on making 2017 the best year ever!”

“Lauren and I go back a couple of years. Fans love her at conventions,” Vette said. “Whenever she cams at VNALive.com she gets a great response and members adore her. She’s supportive of other girls. It was time to give her a site to expand her fan base. We are now up to 29 Official Sites… with more coming. Our army of girls is getting larger… stay tuned!”