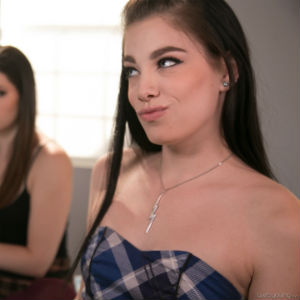 (New York, NY) February 9, 2017 – Bobbi Dylan is becoming known for her passionate and racy girl/girl scenes, and this week she’s got new scenes for Girlsway and Sweetheart Video.

In “The Klutz” on Girlsway’s Web Young site, Dylan teaches her school friend who’s a total klutz (played by Jenna J Ross) to get stains out of her clothes – the solution is to take them off and go naked. Both ladies get topless and braless and Ross sucks onDylan’s newly pierced tits, which leads to muff diving and sensational orgasms for both teens. The scene is out today and was directed by Stills by Alan and produced by Bree Mills. Watch the trailer and full scene at http://www.girlsway.com/en/video//The-Klutz-Scene-01/121537.

Dylan’s debut for Sweetheart Video has made its way to DVD. Girls Kissing Girls 20 features Dylan and Cassidy Klein as rival ballerinas who come head to head after hours in a dance, which leads to a very passionate scene. Directed by Dana Vespoli, the DVD also stars Cherie DeVille, Sovereign Syre, Channel Preston, Lea Lexis, and Casey Calvert. Watch the trailer at http://www.sweetheartvideo.com/en/dvd/Girls-Kissing-Girls-20/64519.

Girlsway and Sweetheart Video are both under the umbrella of the FameDollars affiliate program, making it quicker and simpler for webmasters to promote both new Dylan diddlers.