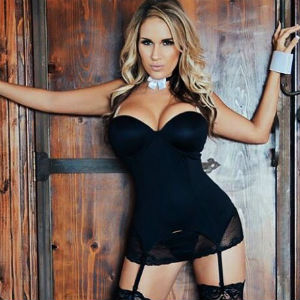 And now, James has hired The Rub PR to up her game and take her blossoming career to the next level.

“I’m excited to not only be working a lot, but also that my scenes are well received and I’m getting more fans every day,” says James. “I’m very serious about my career and want to do well – that’s why I hired Erika [Icon, of TheRubPr.com] and her team. I know I’ve just started in the industry, but there’s so much I want to accomplish, and I know The Rub PR will get me there.”

Webmasters can sample James’s appeal to their surfers by joining NaughtyRevenue to promote Naughty America, and NastyDollars for any and all Reality Kings content.

The sexy siren always gets the most views and highest ratings on her scenes. Her cock master skills and insatiable sex drive, confidence, tight toned body, and gigantic tits keep men and women mesmerized. Keep up with everything in her world by following her on Twitter @teganjamesxxx and Snapchat at theteganjames, and look for her website www.teganjames.com, coming soon to your phone, iPad and computer.

Tegan has also inked an exclusive deal for representation with OC Modeling. She’s currently on the site and available for work in the Los Angeles area from March 8th through March 20th. View her online portfolio of photos at http://ocmodeling.com/model/tegan-james/. Book her for boy/girl, girl/girl, solos, and much more. Get her on your set by contacting Sandra at 818.298.6939 or Sandra@ocmodeling.com.

To interview Tegan James for your site or publication, contact Erika Icon of The Rub PR at erika@therubpr.com.