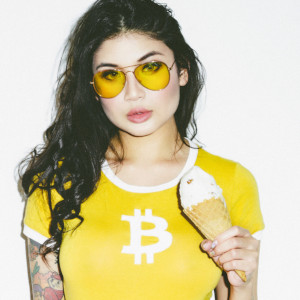 (Las Vegas, NV) October 20, 2018 – Exotic Asian adult performer Brenna Sparks has a lot going on this week – she made Coindesk’s Most Influential People in Blockchain 2018 survey, scored the October cover and feature interview of Kinke Magazine, and stars in new Sweetheart Video and Digital Playground titles.

Coindesk recently posted a survey letting people cast their votes on who they think are the most influential people in blockchain in 2018. The survey consists of six categories and includes the biggest influencers in the cryptocurrency realm, as well as TV personalities, columnists, economists, and more. As an advisor to Spankchain and crypto aficionado, Sparks is up for the Personalities & Public Figures category along with Warren Buffett, CNBC’s Brian Kelly, and others. Fans can vote for her, once per IP, at https://www.surveymonkey.com/r/ZRF3W95?ref=tokendaily.

Sparks also graces the cover of the October issue of Kinke Magazine. Helmed by Marabelle Blue and featuring the finest in alternative lifestyles, Sparks is spotlighted on as the cover in a sexy bra and panty ensemble and is referred to as a “rising star”. The feature includes a photo spread of new photos and an in-depth interview covering topics including what it’s like to be wanted and working with the top adult studios, her Spankchain advisor role, FOSTA/SESTA issues, educating the public on and cryptocurrency. Kinke Magazine is available exclusively at https://www.kinkemag.com/in-the-mag.

“I was extremely honored to be part of Coindesk’s survey and to be considered an influencer in the blockchain world, and not just as an adult star,” says Sparks. “And, I love the cover of Kinke Magazine. The interview is very informative and my fans will definitely learn a lot about me.”

Sparks has new titles from Sweetheart Video and Digital Playground: DP’s Hooked on Big Tits features her scene as a pizza delivery girl with Xander Corvus, previously only available to members of their site. Sweetheart Video‘s Lesbian Strap-On Bosses Vol. 3 has her paired with Kira Noir in an unforgettable scene. Both titles are available now on DVD from your favorite online e-tailers and local adult stores around the country.

No spam, notifications only about new products, updates.
PrevPreviousLance Hart Is Ready to Rock the Str8UpGayPorn Awards
NextLiveJasmin Partners With PumaPay To Offer Cryptocurrency PaymentsNext
On Key