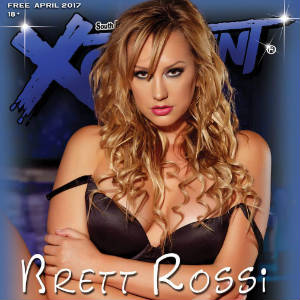 (Hollywood, CA) April 8, 2017 – Brett Rossi is this month’s cover star of featuring dancing magazine Xcitement and a six-page spread. Mainstream men’s website Ask Men also interviewed the adult star to get answers to some burning questions including what she likes in bed.

Rossi’s seductive photo on the Xcitement cover was taken by the infamous Holly Randall. Many of Randall’s pics also appear in the six-page feature, along with photos by Barrett Blade that only appear on Rossi’s website through the Crushgirls Network. In the interview, Rossi reveals how she comes up with material for her stand-up comedy shows, where her Penthouse Pet of the Year pics were shot, who she admires in the industry, her relaunched website, directing, and much more.

The print edition of Xcitement is available at gentlemen’s clubs across Florida. Check out the magazine online at http://www.xcitement.com/ and click on “View Magazine”.

“I’m honored to be the cover girl for Xcitement this month,” says Rossi. “I have a ton of features booked this year and I will have signed copies for sale. I’m also very excited that Ask Men interviewed me. I hope the advice helps guys and makes them more confident in bed.”

Another place you will find Rossi is Die Screaming. She recently interviewed with the them and did their 8 Questions interview. View it at http://www.die-screaming.com/brett-rossi-interview-314786/.

Rossi’s renewed site can be promoted via the CrushGirls affiliate program.