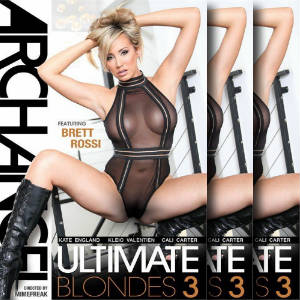 (Hollywood, CA) June 19, 2017 – Brett Rossi recently inked a deal with ArchAngel, and now her 1st scene and DVD with them are out.

ArchAngel also made the scene entitled “Blonde Bombshell” available for members of their site last Friday. The 33-minute scene is accompanied by 114 high res photos, along with a second photo set from the scene of 90 additional photos dubbed “Brett on the Hunt”. Fans can view the scene and both photo sets at http://www.archangelvideo.com.

“It was very exciting to film the second IR scene of my career, and I’m happy that it was for ArchAngel,” says Rossi. “MimeFreak was amazing on set – the photos and scene look amazing. And, Prince was literally a prince. He did his best to make me feel not only comfortable, but also extremely sexy while filming the scene.”

Ultimate Blondes 3 is available now at your local adult store and online e-tailers like Adult Empire and Gamelink. View the trailer at http://archangelblog.com/ultimate-blondes-3/.

Bank on Rossi’s success and promote her home site BrettRossi.com by signing up with the CrushGirls Network‘s ModelCentro affiliate program