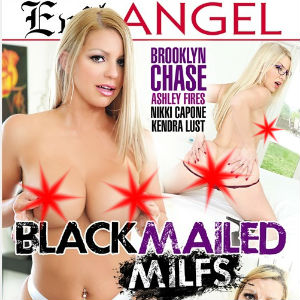 (Hollywood, CA) February 17, 2017 – Brooklyn Chase is one of the stars of Evil Angel’s Blackmailed MILFs, a new series from Director Kevin Moore.

Out this week, Blackmailed MILFs also stars Nikki Capone, Kendra Lust and Ashley Fires, who are all blackmailed in various scenarios by Logan Pierce, Brad Knight, and Tyler Nixon. Watch the trailer at http://www.evilangelvideo.com/video/5620/blackmailed-milfs/. The DVD is available at your local adult store or favorite online e-tailer. Members of Evil Angel’s site can also view Brooklyn’s scene online at http://www.evilangel.com/en/video/Cheating-MILF-Brooklyn-Blackmailed/122656.

“I always enjoy working with Kevin Moore and getting to act, even though it’s a gonzo scene,” says Chase. “The scene with Justin was amazing and all the orgasms were real. Kevin was very impressed with the scene, and I think that’s why he featured me on the box. Buy the DVD or watch my scene on Evil Angel’s site, and let them know how much you enjoyed it!”

Webmasters impressed with Chase’s obvious gifts may want to promote her BrooklynChase.com home site by signing up with the PUBACash affiliate program.