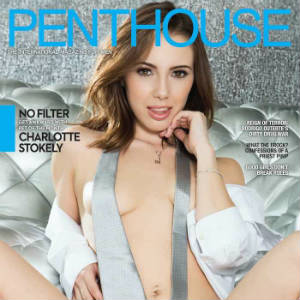 (Los Angeles, CA) Girl next door Charlotte Stokely has made over 400 adult films, was a Twistys Treat for June 2015, had an American Apparel campaign built around her, appeared in mainstream movies like Black Dynamite, and was a contestant on Jenna’s American Sex Star. She’s also received multiple nominations including three back-to-back AVN Awards nominations for Female Performer of the Year and a 2015 XBIZ Award nomination for Girl/Girl Performer of the Year. Plus she won the 2017 ALT Award for Most Beautiful Pornstar. But one of the biggest scores of her career could be that Stokely is the Penthouse Pet for May 2017.

The blonde blue-eyed girl/girl model is featured on multiple pages of the current issue of Penthouse available on newsstands everywhere through next month. In a photoshoot by Tommy O, Stokely’s 12-page spread has a retro 1970s feel with poolside and cabana shots, along with a few hippie shots.

“I’m so very honored to be a Penthouse Pet,” says Stokely. “I join an extraordinary group of women who have been previous Pets. I hope my fans and Penthouse readers will enjoy the May issue.”

“We’re extremely proud of Charlotte – this is huge!” says Sandra McCarthy, Co-Owner of OC Modeling. “Charlotte is beautiful on the inside and out, and we’re so glad she’s the Penthouse Pet for May.”