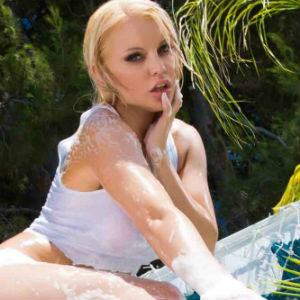 (Los Angeles, CA) Stacked blonde Kenzie Taylor has been in the industry for under two years and she’s definitely made her mark. Earlier this year, ArchAngel signed her as a contract star and she’s worked with top shelf studios Evil Angel, Wicked Pictures, Zero Tolerance, New Sensations, and Reality Kings. Along with scoring multiple solo covers, fans can’t stop talking about the buxom blonde’s physique and her smoking hot on-screen performances. And, the stunner has received a 2017 AVN Awards nomination for Best All-Girl Group Sex Scene.

The future is looking bright for Taylor and she’s ready to up her game to take her career to the next level. Part of that is signing with OC Modeling. Taylor is available for boy/girl, girl/girl, interracial and much more.

“I couldn’t be happier than to be signing alongside the great team at OC,” says Taylor. “I want 2017 to be an even better year for me than last. I’m going to also be focusing on my website and feature dancing. Excited for my fans to see what happens next!”

“Kenzie is as gorgeous on the inside as she is on the outside and we’re thrilled to have her as part of the OC Modeling family,” says Sandra McCarthy, Co-Owner of OC Modeling. “We know great things are ahead for her and we are excited to be a driving force for taking her career to the next stage.”

Taylor’s work with Archangel Video can be promoted through the ArchAngelDollars affiliate program.

Taylor is available exclusively through OC Modeling. Get her on your set by contacting Sandra at 818.298.6939 or Sandra@ocmodeling.com.

OC Modeling provides attractive male and female models of all types interested in working in adult films a chance to make excellent money and build careers in the industry. There are many talent agencies out there, but OCM is different – they have a strategic partnership with a top Internet company and an in-house PR company. Talent can make much more money beyond just bookings for shoots.

OCM’s goal is to develop a web presence for their select models and give them the ability to generate additional income through official personalized websites, live webcam shows and much more. Additionally, they keep their models on top of their game and in the press with interviews, magazine placement, and much more.

OC Modeling is an award-winning agency – their models have garnered countless AVN, XBIZ, and other influential award show wins throughout their ten-plus years in business. With offices in Chatsworth and Las Vegas, OC Modeling is representation refined. For more information on OCM, go to https://ocmodeling.com/ and follow them on Twitter @ocmodeling.

All media inquiries about OC Modeling and their talent should be directed to Erika Icon of The Rub PR at erika@therubpr.com.