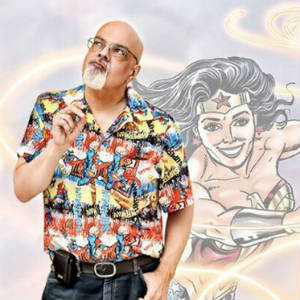 (Tampa, FL) August 4, 2017 – If you’re a comic book fan or you’ve picked up a comic book in the last 20 years, you’ve more than likely experienced comic book legend George Pérez’s work. He has penned and illustrated countless titles for Marvel and DC, including The Avengers and Teen Titans. He made Wonder Woman a hit, revived a character that had been put on the shelf and gave her girl power, and changed the course of female comic book characters and how women are thought of in the world.

Monthly Fetish secured an exclusive interview with the legend for their extra special Cosplay Edition for August. In the Unbound Interview, Pérez tackles questions on how he got his start, working for two rival comic book companies at once, the debt of gratitude the makers of the recent Wonder Woman film showed him, his thoughts on cosplay as a fetish and much more. Read the article in its entirety at http://www.monthlyfetish.com/interviews/unbound-interview-george-perez-comic-book-legend/.

“George is nothing short of amazing and this interview was an honor,” says Editor Jenn. “I’ve been a huge fan for years and being able to interview him was a dream come true. The best part is we went way beyond the pages of the comic books and really got to know the man. I hope our readers enjoy it.”

Check out the Cosplay Edition of Monthly Fetish at http://www.monthlyfetish.com/.

Audio versions of the current issue are available at http://www.monthlyfetish.com/fetish-on-film/ and on Monthly Fetish’s YouTube channel https://youtu.be/n_vF4Bp3s7Y.