CrakRevenue’s Founder and CEO, Nicolas Chrétien, Will Be A Keynote Speaker at The European Summit

CrakRevenue’s Founder and CEO, Nicolas Chrétien, Will Be A Keynote Speaker at The European Summit 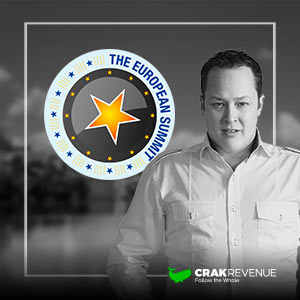 (Québec City, QC) August 16, 2017 – Founder and CEO of CrakRevenue, Nicolas Chrétien will be a keynote speaker at the 2017 European Summit in Prague on September 15th.

The presentation “From Affiliate to CEO – How to Become Your Own Successful Boss”, will show a winning example of entrepreneurship at its finest.

Chrétien’s path to success began in 2004 with the release of his first viral video. The video at the time got a ton of traction, solidifying Chrétien’s knack for getting hits. CPA network CrakRevenue was soon founded, and ever since it’s been one successful non-stop ride to the top.

Now, more than 10 years later, the CPA Network is a leader in its field. With a network of more than 25,000 affiliates, exclusive partnerships with renowned providers, monthly page impressions surpassing 50 billion views per month and an ever-growing staff, CrakRevenue combines experience with innovation.

Since the beginning, Chrétien has redefined the boundaries of the industry. With his TES 2017 keynote, Chrétien hopes to inspire other affiliates to always keep pushing ahead.

“I want to share my in-depth understanding of this ever-changing industry,” says Chrétien. “The European Summit is the perfect occasion for affiliates to learn, and I couldn’t be more excited for the opportunity to speak and help affiliates reach new heights.”

This European Summit, which runs from September 14 to 17, 2017, is the perfect place for networking and building new partnerships. And, to make things even sweeter, the event is free for affiliates to attend.

Nicolas Chrétien is the founder and CEO of CrakRevenue, an industry-leading company in web traffic monetization. At the head of business development, Nick understands the business side of things better than anyone and knows just what a great partnership takes. Unafraid to go against the grain, Nick has had unparalleled ambition in bringing emerging technologies to the forefront. With a passion for numbers and a flare for design, Nick has formed long-lasting partnerships that make CrakRevenue what it is today.