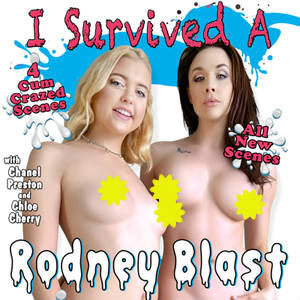 “I shot my first scene on December 22, 1991,” says Moore. “A couple responded to an ad I put in LA Xpress, and I shot them at a motel outside of Disneyland, of all places. I looked at the scene six months later and felt sorry for the poor schmuck who had to edit it. Fortunately, I got better at it.”

He didn’t just improve. He excelled. Quickly, Moore became known as a one-man show for creating pornographic excellence – writing, directing, producing, performing, and editing his own video series across a variety of genres.

In the latest installment from the series of the same name, the experienced Rodney shows his young costars the ropes, in more ways than one. Known for his unique knack for discovering new talent, Moore brings together an all-star cast of starlets in this fresh, sexy sequel.

Petite cutie Anastasia Rose got her mom a sex machine to use when step-dad Rodney goes away on business trips, but she wants to make sure it works just right. While she’s taking it for a test drive, Rodney walks in. Turns out he’s got a toy hiding between his legs she wants to try out too.

Chanel Preston and Chloe Cherry team up for a family reunion with stepfather (and step-grandfather!) Rodney. Looks like they also suffer from the same kinky compulsion: dick-sucking and ass-licking. He can’t resists their advances, and he’s in ecstasy as their tongues work his dick and butt hole at the same time. They’re in heaven as they share a Rodney Blast.

Finally, tattooed blonde Lilly Summers is excited for her very first professional adult video. Knowledgeable Rodney shows her a secret technique to perk her up for her shoot, and she shows off her budding oral prowess.

I Survived a Rodney Blast 18 is out now and available at your local adult store or favorite online adult retailer, including Adult Empire http://store.rodneymoore.com/streaming-video-on-demand.

Webmasters can get surfers to join Rodney Moore’s Mega Site for access to 12 incredible sites for one low monthly price by signing up with the RodneyBucks webmaster program, while Moore’s VOD Store can be promoted via AdultEmpireCash.

All media requests for Rodney Moore and Rodnievision should be directed to Eddie Wood at eddie@rodneymoore.com.