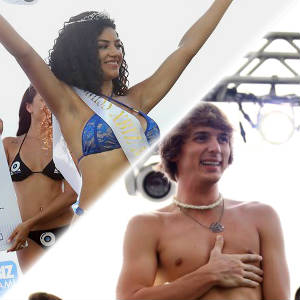 (Miami, FL) June 7, 2017 – The XBIZ Bikini and Mankini Contest, hosted by @VickyVette and Jeff Dillionaire at the Mondrian Southbeach pool, proved to be another rousing success with 17 girls and 7 guys vying for the coveted titles. Both winners were first-time participants.

The first-place XBIZ Miami Bikini Contest winner was Honduran beauty Dailee Jones, who answered a Craigslist ad for the contest. It was her first-ever bikini contest after recently moving to Miami from Ocala to try her hand at a modeling career while working at a sports bar. Jones posted a winning pic on her Instagram here: http://bit.ly/2rx8CmQ. Her Latin Hip Hop dancing on stage proved to be an irresistible hit with the crowd. Second place and third place went to @ShawnaLeneeShow and @MelodyKush, respectively.

The always-amusing Mankini contest was also a hit with the crowd. A fresh-faced contestant who got his start camming on Chaturbate won the title: Leon, who can be found on twitter @MattSpinicker.

“I never had the courage to enter a contest before so I was excited to try,” Bikini contest winner Jones said. “I have only just moved to Miami to pursue my dream of modeling so it’s awesome to actually win something. Thank you XBIZ!”

“I am shocked and flattered that I won the contest,” Mankini winner Leon said. “It was amazing to be surrounded by so many great-looking people. There was a lot of wonderful talent and the competition was fierce! We had so much fun & I can’t wait to return!! I am going to buy more boy shorts with the winnings!”

“You could not have asked for a better location or turn-out for the contest this year with so many amazing ladies – and guys,” event host Vette said. “We barely had enough room on stage for all the talent. Moe and Alec at XBIZ really do a tremendous job putting together such a large event. It’s always one of the funnest industry events I go to.