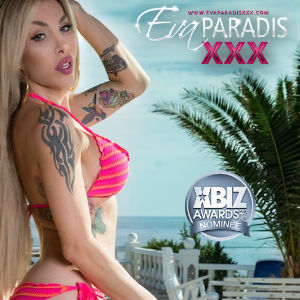 (London, England) Exotic Italian t-girl Eva Paradis had just returned to London after filming in Spain for two weeks, when she learned she had been recognized by the 2017 XBIZ Awards and scored a Trans Performer of the Year nomination. The nomination recognizes not only her body of work for the year, but also her abilities as a performer and stellar scenes.

Paradis has been very busy the past year filming scenes for her SMC Network site EvaParadisXXX.com and has also branched out to film with top-shelf studios like Evil Angel, Trans500, and Virtual Real Trans.

While in Spain, she filmed “tons” of new content for her site with other t-girls in her network, including Angelina Vallis, Sunshyne Monroe, and Mia Isabella. The new scenes will appear on her site over the next few months and feature exotic locations, high glamour, and Paradis’ new blonde look.

“I was incredibly happy to see my name on the list of XBIZ Awards nominees,” says Paradis. “I know there’s stiff competition (no pun intended) like Venus Lux, but I am hopeful that I will win this esteemed award. Thank you XBIZ for nominating me!”

In addition to new scenes for her fans, Eva is looking to expand her brand and become a worldwide sensation. She has hired The Rub PR, who will be booking her for interviews through the end of the year and while she appears at the XBIZ trade and award shows, along with the Adult Entertainment Expo (AEE) and the AVN Awards this January.

“2017 is going to be my year – I’ve already branched out and started filming with top adult studios and I can’t wait to work with more,” says Paradis. “My priority will always be my SMC site, where I can have control over what I shoot and interact with my fans. I’m excited to work with Erika [Icon of The Rub PR] and her team and achieve world domination!”

Webmasters interested in promoting Paradis’ own site as well as a host of other t-girls should sign up for the SMCRevenue.com affiliate program.

The XBIZ Awards are set to take place on Thursday, January 12th, 2017 at the Westin Bonaventure Hotel in Los Angeles and will be hosted by the infamous Ron Jeremy. More information about the awards can be found at http://xbizawards.xbiz.com/.

Paradis will also be available to do filming while she is in Las Vegas and after the convention and award shows with selected studios, producers, and directors.

Exotic Italian t-girl Eva Paradis is known for her killer curves, pouty lips, seductive charm, and perfectly placed body art. With the flick of her blonde hair, batting her green eyes, whispering naughty things in her sultry Italian accent, she’s captured the hearts of men the world over. Always an exhibitionist and sometimes a voyeur, she lives up to her name – her first name is inspired by the first woman and she always takes men to paradise.

With less than four years in the biz, her first few years exclusively producing a wide variety of content for her site http://www.evaparadisxxx.com/ and SMC network. In the last year, Eva has also worked with top-shelf studios like Evil Angel, Trans 500, and Virtual Real Trans and scored DVD covers for Joey Silvera’s TS Factor 3 and Trans500’s Transsexual Sexcapades 4.

When Eva isn’t on set you will find her in a club enjoying deep house or trance, shopping for clothes from favorite designers Chrisitan LouBoutin and Dolce & Gabana, enjoying pizza or a glass of champagne, or making the perfect getaway from London to the country or a beautiful beach. Keep up with all her adventures on Twitter @evaparadisxxx, Instagram @evaparadis, Snapchat at eva.paradis and her official Eva Paradis fan page on Facebook.

To interview Eva Paradis for your site, publication or show, contact Erika Icon of The Rub PR at erika@therubpr.com.

Top adult studios interesting in booking Eva should email her directly at eva.paradis@ymail.com.