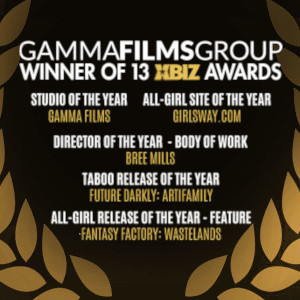 (Montreal, QC) January 21, 2019 – Gamma Films and its specialty studios Girlsway and Pure Taboo have been honored with 13 XBIZ Awards for exceptional creative work in adult production this past year.

“Thank you, folks at XBIZ – we appreciate your unending support, awards nominations and trophies, because you inspire us to excel and make the most amazing movies that we know we are capable of creating,” said Bree Mills, Gamma Films’ Head of Production.

Gamma Films and Mills took home XBIZ trophies for Studio of the Year and Director of the Year – Body of Work, respectively, while Mills’ signature lesbian erotica site Girlsway.com won for All-Girl Site of the Year.

Girlsway also won two awards for All-Girl Release of the Year – Feature for Fantasy Factory: Wastelands, and All-Girl Series of the Year for its ‘Girl of the Month’ spotlight tribute Showcases.

Tommy Pistol was honored with two awards for acting: Best Actor – Feature Movie for Anne: A Taboo Parody and Best Actor – Couples-Themed Release for The Weight of Infidelity.