Lazeeva Breaks Out Of German Market For International Expansion

Lazeeva Breaks Out Of German Market For International Expansion 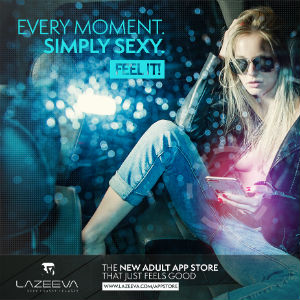 “Specifically, those technologies that currently write the future chapter of the adult industry like virtual reality, augmented reality or interactive sextoys are dependent on native mobile apps rather than browser-based internet. This enabled us to demonstrate the immense perspective for our concept during its beta-launch in Germany.”

From July to December 2016 Lazeeva had its test-store installed by more than 12,000 users. According to the company’s CEO, Tilmann Petersen, this was achieved with a very small marketing budget, primarily used to test different channels and target audiences.

“We currently see about 1,500 active users added every week,” says Petersen. “However, it was our conversion rates, user registrations, premium downloads and in-app purchases that convinced our existing investors.”

Tilmann attributes these strong indicators to Lazeeva’s emphasis on trust and privacy. For instance, users can camouflage the app store icon and protect it from unwanted access thanks to an additional passcode.  Further, none of the adult apps downloaded from Lazeeva App Store show up on the users’ home screens, as they are all stored inside a secret shelf that can only be accessed through Lazeeva.

“Privacy, payment security and a high-class app portfolio are the three pillars that define us,” says Tilmann. “No matter if you enjoy our apps alone or together with your partner, you can always do so with a good feeling and carefree.”

Lazeeva’s founders are currently raising new funds in addition to their existing seed-investors in order to support an international roll-out into markets with high Android-penetration across Europe and Asia (i.e. Android’s world market share is 87%).

Interestingly, in China more than 90% of all Android apps are downloaded from third-party app stores other than Google Play.

“Besides sextoys, e-commerce, and gaming we specifically want to focus on live cam-apps, given that mainstream live-streaming apps such as Bigo Live are the most downloaded mobile apps across Asia,” says Lazeeva’s Founders. “Our ultimate vision is, however, to establish and grow Lazeeva as a brand that represents a modern lifestyle where sexiness and erotica are integrated elements.”

The company plans to launch a range of new and innovative products and services under this brand umbrella. With all these plans and perspective the Lazeeva team is looking forward to an exciting and sexy 2017!

Lazeeva’s mission is to establish a lifestyle brand adding positive pleasure to every adult in a progressing world. As a first product it launched Lazeeva App Store for Adults: an Android marketplace for high-class adult apps. Overall the team wants to build and establish a brand and platform for positive SexTech that users can trust and enjoy without any second thoughts.

Lazeeva puts its emphasis on a sexy and classy lifestyle, which integrates positive erotica into people’s everyday life. Lazeeva leverages music and fashion-elements in order to drive and establish this brand equity. The brand regularly publishes its own playlists and music compilations under their Lazeeva Vibes label. On top of this, it is running the weekly Lazeeva Vibes Show on Ibiza Live Radio (Saturdays from 12-1pm CET): www.ibizaliveradio.com.

Lazeeva is fully owned by Nu Emotions GmbH with its seat in Munich, Germany. It was founded in December 2015 by Tilmann Petersen, Dennis Hauck and Nico Hribernik together with two seed-investors from Switzerland and Norway.

Lazeeva App Store for Adults is an alternative mobile app market for Android. It can be downloaded and installed from Lazeeva.com as own APK. In July 2016 a first beta-version was launched in German and English with marketing efforts to a German-speaking test audience.

Android users can get mobile apps either for free or as paid premium downloads on Lazeeva App Store. Listed apps are from various adult categories, such as video streams, mobile games, erotic fiction, virtual reality, dating and others. Common denominator of all apps is that they are of high quality, do not contain any malware or excessive adware and comply with the brand’s ethical content guidelines. In addition all payment transactions are handled centrally via our own token system (i.e. Lazeeva Pearls), which protects users from any payment risks by third party publishers. Moreover this system also reduces transaction costs for app publishers as they are not charged for each single payment.