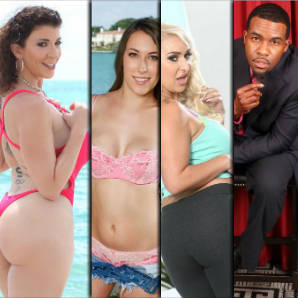 Also appearing in Jay’s booth are stars Kimber Lee, Nina Kayy and Rome Major. Jay, Kayy, Lee and Major will be available for autographs, pictures and will have videos on hand to sign.

Jay continues to be one of the best known figures in adult and is hard at work releasing a number of new Wyde Syde titles this year (through Pure Play Media). Wyde Syde/Sara Jay titles this year include Dream Team, Cougars Crave Chocolate 2, and White Chicks & Black Dicks: Cream.

She recently celebrated 500+ videos on SaraJay.com. On social media Sara currently boasts over 663,000 followers on twitter and 1.1 million followers on Instagram. Her #SaraJayTV channel on YouTube has 20+ million views and over 100,000 subscriptions (one of her videos was featured on MTV’s ‘Ridiculousness’).

“2017 is already off to a very busy year for me,” says Jay. “My company Wyde Syde is growing and it’s important to get out and meet the fans who support us at places like Exxxotica. This is the first adult convention to take place in Denver. I am very excited to see if we can open a new market that we can come back to regularly.

“If you live close to Denver or Colorado, I don’t make it to your state often enough. Come out and meet me, Nina, Kimber and Rome this weekend!”

Fans can also meet Jay online at her official site SaraJay.com where she’s live most Thursdays, free to members.

Webmasters can promote Jay and all the other VNA Girls by joining Vicky Vette’s Sticky Dollars affiliate program.