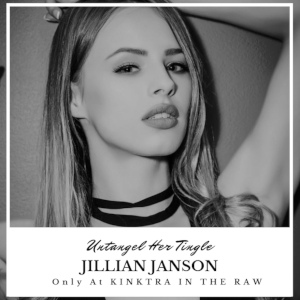 Janson joins hosts Jane Jett and Erinn in the Raw for Episode 25, ‘Untangle Her Tingle: Jillian Janson’. The three women cover a myriad of topics, from her upbringing in Minnesota to playing with a Hitachi Wand. Janson also discusses her love of women and her journey into the adult industry.

Her fans have a lot to look forward to with the upcoming launch of her official website, custom videos she makes for her fans, and how they can go on set and BTS with Janson via Fans.com, premium Snapchat, and SextPanther.

“Jillian and her allure drove us wild – we can definitely see how she’s built a huge legion of fans because she’s simply stunning,” says Jett. “Jillian is that girl you had a crush on in high school. But she’s also a wild child and carefree – she’s the kind of girl you wish was your girlfriend. Listen to her episode and you will be enamored with her, too.”

‘Untangle Her Tingle: Jillian Janson’ and previous Kinktra in the Raw podcasts can be found on Jane Jett’s site, https://www.kinktra.com, as well as links to hear the show on Spotify, iTunes, Google Play, and Stitcher.

Until further news, webmasters can still profit from the original TheRealJillianJanson.com by signing up with the MCProfits affiliate program.