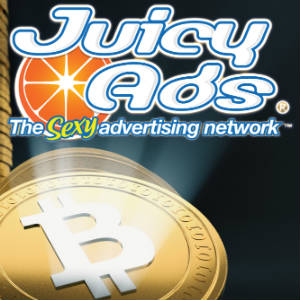 (Vancouver, BC) January 10, 2018 – JuicyAds has announced today that it has become the first adult advertising network to start accepting not just Bitcoin but also LiteCoin and Ethereum as a deposit option for Advertisers.

Crypto currency has been red hot in the news and markets lately as it seems the public (or at least investors) have decided that its time to get into digital currency. JuicyAds has also jumped on board.

“We believe BitCoin is in a short term bubble, but believe in the potential long-term value of digital currency,” said Juicy Jay, JuicyAds CEO and Founder. “These top currencies provide unique opportunities for both our advertisers and our company.”

The company’s decision to add market leader BitCoin alongside secondary coins such as LiteCoin and Ethereum is a key factor that sets the company apart. Market and investor opinions are widely varied on BitCoin and its extreme volatility in price (some calling crypto currencies a “scam”). BitCoin has been in the news for many years and already (sometimes for less than positive reasons) and with nearly 80% of the current “mined” already, the upside may be limited. However, secondary and lesser known currencies such as LiteCoin and Ethererum may show more potential upside and higher potential value for adopters.

“There are a lot of companies (adult and mainstream) accepting BitCoin. There are a lot of exchanges for it as well, but we are yet to see any major adult advertising companies accepting it alongside multiple other crypto currencies,” said Jay. “We will continue to accept our other payment methods and don’t expect significant disruption there anytime soon.”

As an added offer, the company suggested it would accept additional crypto currencies as well.

“If there is another currency that our clients are holding who want to use to load their JuicyAds accounts, we are open to accepting those manually as well,” said Jay.

JuicyAds stated it would start issuing payments to Publishers in cryptocurrency sometime in the future, but no timeline was provided.

JuicyAds is a 20-time award-winning ad network known for their team of industry veterans and top-notch client support for both advertisers and publishers. With low minimums and expert account managers, JuicyAds makes for an easy starting place for new advertisers and webmasters. For more experienced media buyers and webmasters, JuicyAds offers a wide variety of targeting and optimization tools. Visit JuicyAds.com or contact sales@juicyads.com for more information on how to get started.