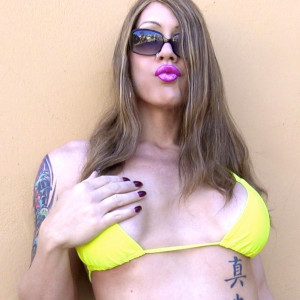 TEAs nominations were announced and Kimber and her studio, Bad Girl Mafia, scored an impressive five, most in major categories. Kimber personally grabbed nominations for Best Cam Model and Ms. Unique. With less than one year in existence, Bad Girl Mafia racked up three awards – Kimber scored a Best Self-Producer nod and their first DVD Shemale Scares garnered a Best DVD nom, as well as Best Girl/Girl Scene for the second scene on the DVD “Shemale Apocalypse” with Raven Roxx & Kimber Haven, and Ryley.

“I was blown away by the sheer number of nominations both Bad Girl Mafia and I have garnered this year from the TEAs,” says Haven. “Last year, I got one nomination for Ms. Unique and this year I scored that again, plus four more for myself and Bad Girl Mafia. I’d like to thank the TEAs, our distributor VIP Digital, director/visionary Lexis Steele, and our publicist, Erika Icon. We have a great team and I’m really glad for the recognition, and am also very excited to attend the ceremony and weekend of events.”

The TEAs and weekend of events start Friday, March 15th and ends with the awards ceremony and after party on Sunday, March 17th at the Avalon Hollywood hosted by Domino Presley. More information about the TEAS and related events can be found at https://theteashow.com.

Webmasters interested in profiting from the fun in Kimber’s Playroom should join Haven’s affiliate program, powered by ModelCentro.