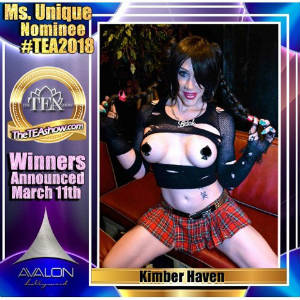 Haven has snagged a 2018 TEA nomination for Ms. Unique, which is very fitting. Haven is known for her height and her variety of looks, from edgy rocker to girly girl to leather-cracking domme and everything in between. And her personality is one of a kind, which lends very well to her weekly radio show, The Totally Inappropriate Radio Show, on The Demon Seed Radio Network.

“I always said that if I was nominated for a TEA, I would attend the awards show, and I’m a woman of my word,” says Haven. “I’d love to win, but I’ve got some stiff competition. Pun intended. I’m excited to attend the show in March, and of course meet my fans.”

The winners will be crowned on Sunday March 9th at the TEA Awards Show taking place at the Avalon nightclub in Hollywood, California and is sponsored by Grooby. For more information, visit TheTEAShow.com.

Webmasters can promote and profit from the once-and-future Ms Unique and her award-nominated KimberHaven.com, by signing up with the site’s official ModelCentro affiliate program.

No spam, notifications only about new products, updates.
PrevPreviousNominations Are Now Open For The 4th Annual Live Cam Awards
NextTrafficStars Signs Exclusive Deal With TNAFlix For Desktop SpotsNext
On Key