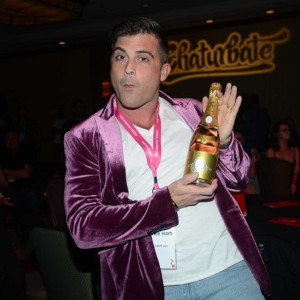 Last Saturday night, the first annual Voyeur Community Awards announced their winners, and Hart was on hand to accept the award for Hottest Actor – Gay. Hart walked the red carpet and was thrilled to accept his trophy, which resembles a festive champagne bottle.

Lance is also up for his very first AltPorn Award nominations for Best Male Performer of the Year and Best Gonzo AltPorn Video for his scene in Evil Angel’s Aubrey Kate +8 DVD.

Presented by MyFreeCams, the 2019 AltPorn Awards are taking place at on Saturday, May 11th at Bar Sinister in Hollywood. Hart will be walking the red carpet and attending.

“I had an amazing week at the Phoenix Forum and was amped up to be nominated for six awards – and winning one was incredible,” says Hart. “I’m also honored to be recognized by the AltPorn Awards and can’t wait to attend them in May.”

Another place you will find Lance is as a guest on the American Sex Podcast with hosts Sunny Megatron and Kevin Melvoin-Berg. In his episode “Lance Hart: The Birth of a Screwnicorn”, a myriad of topics are covered including what it’s like to be on the business side of things in adult, what goes on behind the scenes on set, how consent works, and much more. Hear the entire podcast at http://sunnymegatron.com/lance-hart-podcast/ and also on iTunes, Google Play, Stitcher, iHeartRadio, and Spotify. Members of their Patreon can listen at patreon.com/americansex.

To cash in on Lance Hart’s always growing body of work, webmasters sign up with his own sites’ affiliate program, PervOutAffiliates.com.