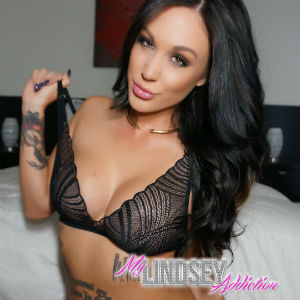 (Hollywood, CA) This year, kinky temptress Lindsey Leigh has been making the media rounds and interviewing with radio shows, podcasts, and more. When she appeared on Gross Misconduct Live, she was a hit and they had her on the entire show. So, it wasn’t a shock when she received multiple nominations in Gross Misconduct Live’s Grossy Awards.

Leigh is up for four awards, tying Anna Bell Peaks, Ryan Driller, Kimber Haven, and Gothic King Cobra for the most amount of nominations. She’s up for Most Interesting Guest, Favorite Adult Performer, Funniest Guest, and Sexiest Guest.

“The guys at Gross Misconduct are so much fun and I really enjoyed being on their show,” says Leigh. “I’m honored with the nominations and would love to win one or more of them.”

Also, make sure to check out the new scenes on Leigh’s AVN Award nominated site. She’s been working hard on new fetish and financial domination (aka findom) videos, many of them exclusive to the site as a perk for members of MyLindseyAddiction.com.

To interview Lindsey Leigh for your site, publication or show, contact Erika Icon of The Rub PR at erika@therubpr.com.

Millions of fans around the world have become addicted to Goddess Lindsey Leigh. Lindsey entices them with her perfect body, pouty lips, wicked sense of humor, and her kinky fetishes that include cuckholding, CBT, foot worship, domination, financial domination, giantess, and much more.

With seven years in the business, Lindsey is a self-made woman who mainly produces her own content for her site http://www.mylindseyaddiction.com and clips and customs on iWantClips https://iwantclips.com/store/148/Lindsey-Leigh. In both arenas, she controls your mind and your wallet. Lindsey has also worked with premiere fetish studios and performers including Scissor Vixxxens, Goddesses Footboy, Humiliation POV, Spectrum Wrestling, Bratty Foot Girls, Goddess Jessica, Ceara Lynch, Princess Lyne, and Bratty Bunny. In 2016, her website received an AVN Awards nomination for Best Solo Girl Website, and she personally received four nominations for GML’s Grossys Awards.