Highly Anticipated Feature to be Available Through GayHotMovies.com January 19 – February 23! 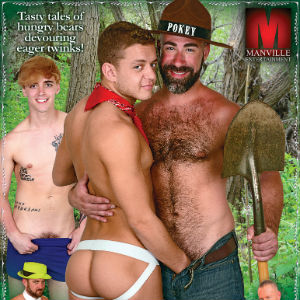 Director of Photography Jock Rollins once again partners with Austin to create the colorful, fun, and sex-filled parodies in which Manville Entertainment specializes.

“I love unexpected themes and pairings,” says Austin. “With the first Twinky and the Bear, the juxtaposition between hairy and smooth really struck a chord with fans.”

“Manville Entertainment always seems to strike the right note between the cheeky and the sexy, with its’ storytelling and performers poking fun at pop culture, while poking each other so deliciously,” says COPBlog (www.ChroniclesOfPorniaBlog.com).

Webmasters interested in promoting GayHotMovies.com and Twinky and the Bear 2 should sign up with the MovieDollars affiliate program.

Manville Entertainment’s feature films are now distributed through powerhouse distributor Pure Play Media. “Distributing the Manville catalog through Pure Play is a game-changer for us,” raves Manville Executive Producer Austin. “They are simply one of the biggest and most diverse distributors in the industry.”

Retailers and distributors interested in ordering Manville Entertainment titles should contact Adam H. via e-mail at adam@pureplaymedia.com or at 800-999-2483 x1228.