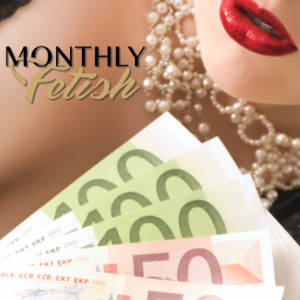 (Tampa, FL) July 9, 2017 – The July issue of Monthly Fetish Magazine is all about the dollar bills and big thrills that happen in the world of Financial Domination (AKA FinDom).

FinDom is big business and Monthly Fetish cracks the whip with articles explaining the fetish, what it’s like to be a money slave, how to be a successful Money Mistress, and sites, groups, and forums where submissives (AKA wallets) hangout.

Visitors to the site can find fresh content weekly in Fetish in the News, In Technology, as well as The Art of Fetish. Peruse a variety of highly entertaining news items including non-sexual things that can cause orgasms, why Sweden may be offering paid sex breaks, and much more.

Each month, Monthly Fetish features interviews with major players in heir “Unbound Interviews”, and this month it’s Goddess Jasmine Mendez, who made FinDom famous and became an international star after her appearance on MTV’s True Life series. Mendez talks about how to become her slave, how she got started, and the huge successes she’s attained that include two homes and paid vacations.

“FinDom is definitely on the rise and a fetish that many people are very curious about,” says Monthly Fetish editor Jenn. “We’ve had a lot of inquiries about it, so it only made sense to make it the July feature. As with all our topics, we hope our readers will become enlightened on the topic and feel free to write us with their comments in our Ask Us Anything section.”

Check out the FinDom edition of Monthly Fetish at http://www.monthlyfetish.com/financial-domination-where-dollar-bills-equal-big-thrills/.

Each issue also adds to their compilation of special audio coverage of featured fetishes  http://www.monthlyfetish.com/fetish-on-film/ as well asa to their own YouTube channel https://youtu.be/n_vF4Bp3s7Y.