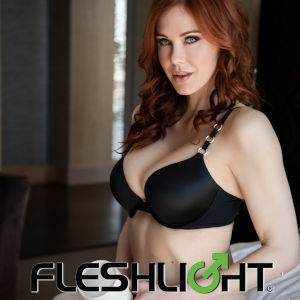 “We knew the Maitland Ward line was going to be big, but this exceeded even our expectations,” said Fleshlight® Director of Marketing Daniel Harvell. “Being a Fleshlight Girl already means you’re part of an exclusive club of top-level adult stars, but Maitland took it to a new level. She’s joined an elite group of best-sellers like Riley Reid, Mia Malkova, Stoya and more – with her work ethic and rabid fan base, she’ll almost certainly be part of this crew for years to come.”

The new line of Fleshlight® products includes toys molded from Ward’s anatomy back in January of this year. There are two products in the Maitland Ward line: “Toy Meets World” features an orifice modeled after her vagina, and “Tight Chicks” replicates her butt. Both have unique inner textures, which were proudly designed and produced in the USA. As with all products under the Fleshlight® brand, the toys are made of the 100 percent body-safe patented SuperSkinTM material.

“I am blown away by the support from my fan base across the globe on the first day of sales and beyond,” said Ward. “Being part of an extraordinarily elite group, such as Fleshlight, is an immense honor and I’m so happy to be a member of this family.”

Headquartered in Austin, Texas, Fleshlight® was established in 1995 and quickly became the top-selling pleasure products brand for men. The private company, owned and operated by Steven and Kathy Shubin, has multiple production and distribution facilities located throughout the world. Fleshlight offers patented SuperskinTM texture toys, which are designed to closely emulate the soft and flexible feel of the human body and molded in the shape of a vulva, butt, mouth or non-descript orifice. The company’s line of adult toys includes Fleshlight Classics, Ice, Stamina Training Unit, Vibro, Flight, Turbo, GO, Quickshot, FleshJack, and the world-famous Fleshlight Girls toys, which feature exclusive molds of some of the world’s most famous adult models. With over 15 million units sold, Fleshlight is a pop-culture sensation and frequent topic of discussion on social media platforms, movies, television programs, and news sources.

No spam, notifications only about new products, updates.
PrevPreviousBBW Awards 2021 Pre-Nomination Voting Opens
NextAdult Time’s ‘Over The Edge: The Ultimate Jerk Off Challenge’ is Live Tonight!Next
On Key