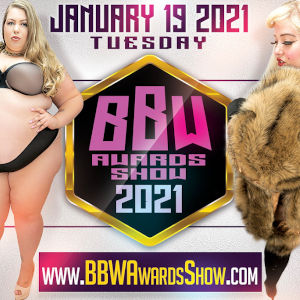 This year, the nomination and voting process has changed. Voting for pre-noms opened on May 1st and will continue through July 1st, when the nominees will be announced. Voting for nominees will start then and continue through October 1st. Two things won’t be changing – winners are chosen 100 percent through fan and industry voting, and only one vote per IP is allowed and will be strictly enforced.

The pre-recorded show will be taking place on Tuesday, January 19th, 2021. Mz 007, who was a huge hit last year, is slated to perform again this year. Models interested in announcing a category during the show can email contact@bbwawardsshow.com.