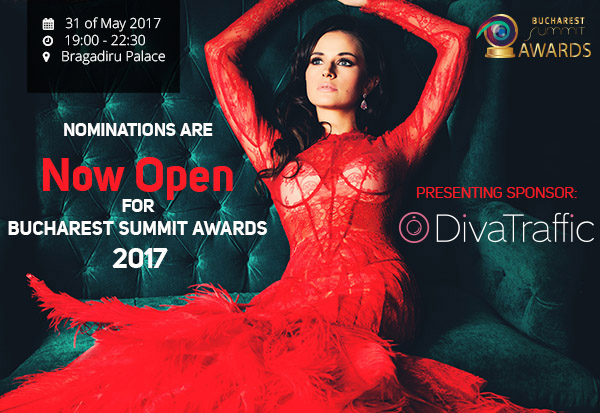 (Bucharest, Romania) March 25, 2017 – “Awards are one of the most powerful and cost-effective marketing tools nowadays existing,” says Bucharest Summit organizer Evelina Cirlan. “This is the very reason we are organizing a gala where winning a prestigious award can help your business stand out from the crowd, send a positive message to your existing customers and attract new businesses.”

Bucharest Summit Awards are taking a unique approach to its awards process.

“This is going to be the only Award Gala to use a real time voting system powered by the designated attendees of the Gala in order to appoint the winners for each proposed category,” says Cirlan.

While nominations are currently open for everyone in the industry, the last stage will take place during the Gala itself, where a designated jury will be in charge of the final decision making.

As far as the regulations are concerned, any registered person to Bucharest Summit Awards has the eligibility to nominate and to be nominated, as well as to self-nominate his company, or themselves as an independent mode,l as long as the submission complies with the proper category.

In order to participate in the nomination system one does not necessarily need to have tickets for the Gala, or to attend the Summit, but to register to Bucharest Summit Awards. Find out more about the voting system and registration here: BucharestSummit-Awards.com

The event will take place May 31 at Bragadiru Palace in Bucharest.

With more than 10 years of experience developing award-winning ad technology and traffic services, DivaTraffic’s token-based system has been successfully implemented on multiple livecam platforms and officially launched in March 2017. While still a relatively new concept, DivaTraffic is continuing to develop the platform to make the best available traffic product for models and studios across the globe. To do this, DivaTraffic is working closely with studios and models to maintain an open dialogue and interaction, and are very appreciative of any and all types of feedback. DivaTraffic is the go-to game-changer in the adult camming industry to empower everyone who uses the platform. Find more about them here: www.DivaTraffic.com

“It is one of our main goals to make the Bucharest Summit Awards Gala one to stand out and empower people and businesses,” says Cirlan.

“It’s time you put your business into the spotlight!”