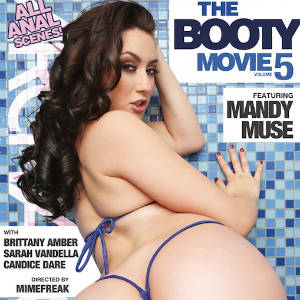 The latest edition of the fan and critic favorite features two ArchAngel debuts and two ArchAngel veterans. The bootylicious Mandy Muse helms the cover of The Booty Movie 5 in a string bikini that shows off her money maker. Britney Amber is fierce and voluptuous, and enjoys every second of her ass being tapped. Candice Dare sports a neon pink sling shot and hypnotizes with her amazing salt shaker, and Blonde bombshell Sarah Vandella’s bodacious backside delivers another wild scene. MimeFreak captures the footage and directs the mayhem.

“The fans have been asking when the next Booty Movie was coming out,” says General Manager and Director MimeFreak. “We wanted to make sure this one was extra special, with four amazing bootys and it’s the all anal-version. This DVD also marks the return of us asking the fans for their input, and it could be one of the best Booty Movies ever.”

Watch the trailer for The Booty Movie 5 and get ready for a whole lot of twerking at http://archangelblog.com/youve-been-asking-for-it-its-here-the-booty-movie-5/.

Webmasters can promote all Archangel Video content by signing up with their affiliate program, ArchangelDollars.com.

No spam, notifications only about new products, updates.
PrevPreviousRicky Johnson Has a Serendipitous Week with a New Scene & 2 New DVDS
NextNominations Now Open For Bucharest Summit 2017 Awards GalaNext
On Key