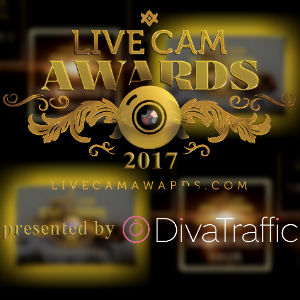 (Bucharest, Romania) February 7, 2017 – Voting is open for third annual edition of Live Cam Awards, presented by DivaTraffic and set to take place March 5th, 2017 at the legendary spanish mansion Finca Mas Solers, in Sitges, Spain, during The European Summit. Industry and fans can cast their votes now through February 28 in more than 30 categories targeting models, cam companies and business partners.

Live Cam Awards was established March, 2015, as the first award show devoted entirely to the live cam industry, self-handled by a cam model and dedicated to all cam models.

“My goal is to give something back to the industry,” says Alexandra Georgia, cam model and organizer of the event. “I want models to get out there and embrace their fame, I want them to shine like the real stars they are and I want them to receive the recognition they deserve.”

This year is the LCA’s third anniversary, and as such Georgia says she has a lot in store, surprises made possible only because of the “huge support and recognition” the event has gained over the years from its sponsors; on top of DivaTraffic as main presenter, 2017 sponsors include: BongaCams, Chaturbate, ImLive, Studio20, Charm Group, Flirt4Free, StripChat, Rich Girls Studio, iFriends, Live Cams Mansion, Studio Alba, LALExpo, Feet4Cash, XloveCam and Glam Chat Studio, with more sponsors to be announced.

“I am happy to have next to me this year a man that I admire as business model but also a very good friend of mine,” says Georgia. “Brad Mitchell, who doesnt need any further introduction. Whoever is not working with MojoHost should start doing it right now. you will gain not only a reliable business partner but also a true friend in the industry.”

Voting is now open until February 28th, at http://livecamawards.com, and those planning to attend should RSVP on EventBrite: https://www.eventbrite.com/e/live-cam-awards-2017-tickets-31592476949?aff=es2 .