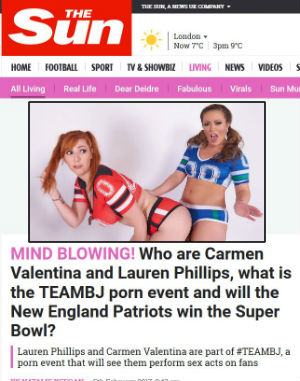 (Worldwide) Wdnesday, February 8, 2017 – The Patriots weren’t the only come from behind winners on Superbowl Sunday. Tom Brady’s record-setting performance and unlikely win over the Atlanta Falcons in Superbowl 51 also resulted in a win for “#TeamBJ”.  If you haven’t followed the worldwide news, adult stars Lauren Phillips (LaurenPhillips.com) & Carmen Valentina (CarmenValentina.com) promised ALL their twitter followers BJs if the Patriots won.

Both girls are going to deliver on their promise.

Understandably the Twitter accounts of both girls exploded after the announcement of #TeamBJ last Tuesday in the press. For those counting, Phillips is on the verge of passing 100,000 followers (up 38,000). Valentina now stands at 389,000 (up 37,000).

The YouTube video of the TeamBJ pledge by the girls (found on YouTube or at TeamBJ.com)  picked up a whopping 300,000+ views in less than a week.

This is the fifth installment of #TeamBJ, which burst to fame in 2010 when Bobbi Eden, Vicky Vette and Gabby Quinteros promised BJs if Holland won the World Cup. Overnight, #TeamBJ was the talk of the Huffington Post, Yahoo Sports, ESPN, the worldwide news and just about every radio station in the USA. Holland lost in the Finals. But in 2012, when adult stars Sara Jay and Angelina Castro took up the #TeamBJ torch if the Miami Heat won the NBA Title, resulting in several high profile media appearances such as on the Russell Brand show, The Heat won. Jay & Castro delivered on their promise (releasing a DVD and streaming the event live as proof).  Two years ago, in 2014 #TeamBJ returned for a third tour of duty as Jay and Siri stepped up to promise BJs if Germany won the World Cup. Germany took home the trophy, and the girls delivered on their promise (releasing another DVD and also streaming the event live). More recently #TeamBJ came close (but no cigar) when Castro and Maggie Green promised BJs if Trump LOST the Presidential Election.

Both Phillips and Valentina are part of the VNAGirls.com network which has hosted all of the #TeamBJ events.

“I was hyperventilating during the game,” Phillips said. “I thought the Patriots were going to lose after going down 28-9 in the third quarter. It was thrilling to see them come back. I honestly can’t wait to deliver on our promise to our followers. We are going to have an amazing time. The more followers the better!”

“Without a doubt this has been amazing. Thanks to the press and fans who have made this all such an incredible ride,” Valentina said. “Lauren and I are working out the logistics to deliver on our promise. The fun has just started!”

To qualify for a BJ, fans must have followed both Carmen and Lauren before gametime Sunday. Details on how to collect the BJs will be posted on TeamBJ.com sometime today, Wednesday, February 8, 2017.

Webmasters can promote both Phillips’ and Valentina’s sites, as well as all the VNA Girls mentioned above by joining the Sticky Dollars Affiliate Program.