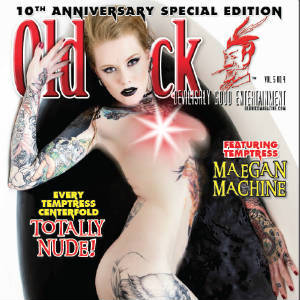 (New York, NY) May 11, 2017 – The APN AltPorn Awards were held this past Saturday night and were well attended by nominees, models, press and other VIPs. Many awards were given all through the night, with one of the most impressive wins being Old Nick  nabbing the Best ALT Magazine Award.

Although Old Nick Editor and Publisher Bob Johnson wasn’t on hand to accept his awesome cut-crystal award, he reported being elated with his win.

“The staff of Old Nick Magazine is thrilled to be honored with this award and our heartfelt thanks go out to MyFreeCams and the AltPornAwards for recognizing us as the first magazine to receive the accolade at their first live awards show,” said Johnson. “Finally, the Devil gets his due!”

Presented by MyFreeCams, the ceremony took place at Bar Sinister in Hollywood. Jeffrey Damnit served as Master of Ceremonies and Malice McMunn joined him on stage as a Trophy Goddess. VIP attendees were spoiled with an open bar, a big after party, and goodie bags with swag from MyFreeCams, Bad Dragon, BlueBlood, Pleasure Chest, and more.

Known as “Playboy with Horns”, Old Nick is devilishly good men’s entertainment. “Old Nick” is another name for the devil. The magazine adopted the moniker and created the publication for the genuine gentlemen with a dark bent, who enjoys fine wine, a juicy steak, a seasoned cigar, and women with curves.  The ‘zine combines explicit photo layouts with a touch of goth, horror, and metal. Old Nick also features exclusive articles and interviews focusing on the obscure and often taboo.

Launched in 2006, the magazine was founded by Dr. Robert Johnson, a doctor of human sexuality. Johnson’s magazine and adult experience is vast and includes prestigious positions at XBIZ Magazine as a Freelance Editor, as a Penthouse Magazine Writer, VP and Editorial Director for High Society, Cheri, Playgirl, and Celebrity Skin, Executive Director at Vivid Video, and Executive Producer and Director of Digital Production & Marketing at Playboy.

All media requests for Old Nick should be directed to Erika Icon at erika@therubpr.com.