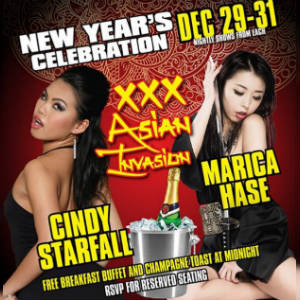 (Hollywood, CA) December 31, 2017 – Japanese adult star Marica Hase is ending 2017/starting 2018 with a feature gig at Larry Flynt’s Hustler Club in Detroit, Michigan located in Lincoln Park. And, it’s going to be an Asian Invasion, because Cindy Starfall will be joining her.

Since Friday, December 29th, Hase and Starfall have been headlining with multiple nightly shows from both ladies. Fans can still party all weekend long with Marica and Cindy right up through New Year’s Eve. On NYE, there will be a midnight toast and a free breakfast buffet. Three nights of an Asian Invasion is definitely something to celebrate!

In between her sets, Hase of course will have meet and greets. Fans can meet the Penthouse Pet, take a selfie with her, and purchase Marica’s exclusive merchandise and/or VIP lap dances.

“I love headlining with Cindy and am excited because the whole weekend is a party,” says Hase. “The club will be packed, so make sure to get their early for the best seats or RSVP for reserved seating. Spending New Year’s Eve feature dancing is going to be incredible. Make sure to come if you’re in the Detroit area!”

Larry Flynt’s Hustler Club is located at 980 John A. Papalas Drive in Lincoln Park. For more info about the venue visit their site at http://hustlerclubs.com/club-locations/larry-flynts-hustler-club-detroit/ or call 313.388.8400. They are open until 2am nightly and feature topless entertainment, full-service bar, happy hour, and VIP packages for patrons over 21.

Promoting and profiting from Hase’s new rising star in the adult heavens is possible thanks to MaricaHaseVIP.com and her own PUBACash affiliate program.