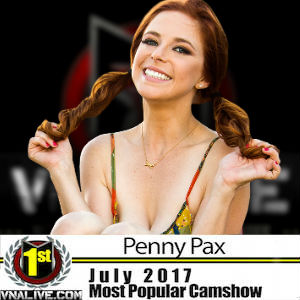 Pax has quickly become one of the most popular stars in adult, having just won the 2016 AVN & XRCO Awards for Best Actress (The Submission of Emma Marx: Boundaries) and the 2016 XBIZ Award for Best Actress in an All Girl Release (Lesbian Fashionistas). She also won a 2015 XRCO Best Actress Award for Wetwork. She just wrapped up shooting the 4th video in The Submission of Emma Marx series for New Sensations. Penny is signed with the Spiegler Girls Agency (profile here: http://spieglergirls.com/html/penny.html).

VNA Live was launched by Vicky Vette in October 2012, as a cam platform for solo girls to add live group shows to their membership sites. Custom designed and built, Vette hosts and runs VNALive herself. It is 100 percent mobile friendly (all live shows can be watched on a phone). Any girl (or webmaster) with a membership site can add VNALive.com to their site (in usually 30 minutes or less). Stars such as Julia Ann, Nikki Benz, Sunny Lane, Tasha Reign, Penny Pax, Jelena Jensen and Sara Jay all use VNALive.com, as well as solo girls like Honey White, Lelu Love, and Jamie Foster in the USA, Louise Jenson and Rebekah Dee in England, Daisy Destin in Canada, the girls from the RadBucks.com network, and BBW models such as Sam 38G, Maria Moore, Kimmie Kaboom & Kristi Maxx. The most popular monthly girl wins $250. Second place wins $150. Third wins $100.

“I am kind of surprised that I’ve won back-to-back months,” says Pax. “I have a lot of fun with my website members so being rewarded for it is super cool. I am known primarily for my performances on film but interacting with the fans is a crucial part of the business. Thanks to all my fans for supporting me… I am going for the three-peat this month!”

VNALive.com’s Vette says, “Penny is the first back-to-back winner for #1 cam model. She’s super sweet and the fan base adores her.”

Affiliates can promote Pax and any or all of the VNA Army of performers by signing up for Vette’s StickyDollars webmaster program.

Webmasters or girls interested in adding VNALive.com can reach Vette at Vicky@VetteNationLive.com.