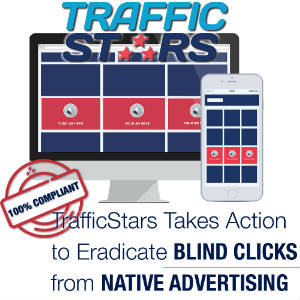 (Limassol, Cyprus) April 8, 2018 – TrafficStars has further innovated their Native Ad technology to completely eradicate blind clicks on Native Ads. In an industry-leading move which benefits both publishers and advertisers, TrafficStars is the only Ad Network in the industry to make such a move to comply fully with Google’s standards.

Google’s new advertising standards stipulate that any click which takes a user away from the page without their knowledge or intent is misleading and this includes blind clicks on blank spaces of Native Ads.

Now, only the links and images are clickable for all Native Ad placements, which means users will no longer be taken to another page by clicking any blank spaces surrounding the ads.

The new technology has already been deployed by TrafficStars and is active on all publishers who have implemented Native Ads on their sites using TrafficStars’ technology.

TrafficStars launched their Native Ad inventory in January of this year and is already the biggest Native Ad Network in the industry. This new update to their Native Ad technology further strengthens their position as the go-to Ad Network for publishers and advertisers.

“We’re pleased to have completely removed blind clicks from Native Ads,” said Peter Rabenseifner, Managing Director of TrafficStars. “This not only benefits publishers by ensuring 100% compliance of Google’s ad standards, but also benefits advertisers by increasing the quality of traffic as we’ve done everything to ensure users will only be clicking on Native Ads intentionally.”

“We’re committed to being ahead of the game in the industry and making sure our technology protects and benefits both publishers and advertisers in every way possible,” said Rabenseifner. “I’m proud to work with a dedicated and talented tech team who can implement such technology quickly and efficiently – we’re already working on new projects to even further cement our position as the number one Ad Network in the industry.”