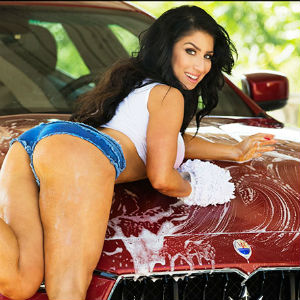 (Hollywood, CA) March 22, 2017 – Busty MILF-next-door Raven Hart has a brand-new DVD out from Devil’s Film. She plays a big tit boss whose assistant has the best job in the world.

In Devil’s Film Big Tit Office Chicks 2, Hart plays an oversexed boss who tells her assistant Robby Echo that “being her assistant is quite easy”. Part of his job entails screwing his boss and it’s definitely a huge perk when you have a boss that looks like Hart. Hart scored some great real estate on the cover, bending over with her boobs literally in your face. Big Tit Office Chicks 2 is out now and also stars Savana Styles, Lily Lane, and Katie Morgan.

Besides filming, Hart has been very busy doing interviews with Kink-e Magazine, Adult DVD Talk and Fleshbot. Most will provide blog writers and other affiliates plenty of fodder for posting, and most will be posted in the next few weeks.