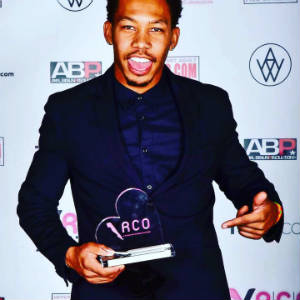 Johnson took home the statue for New Stud at the 2017 XRCOs. He was in attendance and rushed up to the stage to accept his award. The humble, multi-award winning performer thanked all three of his agents at OC Modeling, publicist Erika Icon of The Rub PR, and all the directors and studios who worked with him this last year. As he took pictures backstage in the Winner’s Circle, posing with the coveted award, he promised to continue to be the best performer he could be, win future awards, and make his agent and publicist proud.

“When they called my name, I was in shock,” says Johnson. “2016 was a great year, but I was up against some great talent for New Stud. It’s hard to describe the feeling, but it’s amazing. I was glad that my name called and I was actually able to take the stage to accept it. I’m honored that the XRCOs chose me as New Stud!”

The night’s winners are all on Fleshbot’s XRCO Awards Winners list.