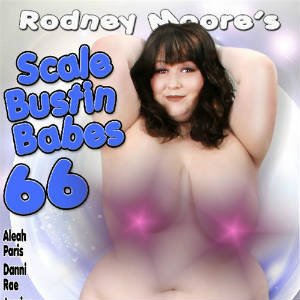 A pioneer in the niche, Moore has always loved chubby girls because of their big, natural breasts, yummy tummies, and curvy butts. Not only are they confident and comfortable in their own skin, they also tend to be very generous in bed. Loveable and cuddly, soft and squishy, these uninhibited honeys are up for anything! Fans of gut flopping and belly button play will have plenty to love in this new film.

Moore welcomes big, beautiful babe Jessica Lust back to the Scale Bustin Babes series, and she is webcamming with Rodney as her stunt cock. But today, Rodney is feeling aggressive. So he shuts off her computer and pins Jessica back on the couch. Taking complete control, he jiggles her belly fat and shakes her big butt. The action gets so heavy that her librarian glasses fall down her nose as dominant Moore squeezes her cute, chubby cheeks.

The entire series and individual volumes are consistently nominated and selected as winners for their excellence in this bountiful genre, including being named “Best Series” at the Fanfest Biggie Awards in 2013, 2015, and 2016.

Scale Bustin’ Babes 66 is out now and available at your local adult store or favorite online adult retailer, including Adult Empire http://store.rodneymoore.com/streaming-video-on-demand.

All media request for Rodney Moore and Rodnievision should be directed to Eddie Wood at eddie@rodneymoore.com.

And Still More on Moore…