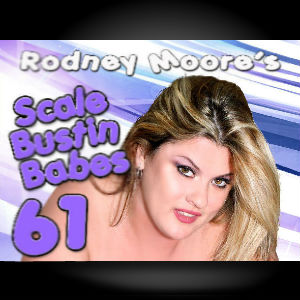 (Chatsworth, CA) Rodney Moore’s Scale Bustin Babes is back again! This time, the award-winning series is back with a mix of fan favorites and newbies.

Curvaceous blonde Kimmie KaBoom helms the cover of Scale Bustin Babes 61 stealing your gaze and teasing you with her giant luscious breasts. Also starring with Moore in the scenes are busty blonde Lila Lovely, stunning beauty Cherry Bardot, and the alluring Aurora. Bodacious redhead Vennomous One makes her SBB debut. With these five lovelies who are pretty, well fed and hot in bed, it’s easy to see why this series continues to stay on top.

“The popularity of this series just keeps growing and growing – our fans not only love BBWs, but also our models because there is something for everyone,” says Moore. “All the ladies in the latest installment turned out amazing scenes and this DVD is definitely going to be a top seller.”

One of the stars of Scale Bustin Babes 61, Cherry Bardot, recently sat down with Fleshbot to promote the DVD. Read the interview and see photos of Bardot from the movie at http://straight.fleshbot.com/6017897/twenty-questions-with-porn-star-cherry-bardot.

Webmasters interested in promoting Moore’s MegaSite can do so by joining RodneyBucks program.

Rodnievision DVDs, VOD and more are available through your favorite adult e-tailers, including Adult Empire https://store.rodneymoore.com/streaming-video-on-demand. Webmasters can join AdultEmpireCash.

All media requests for Rodney Moore & Rodnievision should be directed to Erika Icon at The Rub PR  or erika@therubpr.com.

In 1992, award-winning director and performer Rodney Moore entered the adult biz shooting couples and amateurs, and, over 800 titles later, he continues to be a force to be reckoned with. Known affectionately as The King of Cream, he’s been nominated and won several AVN and XBZ Awards, in addition to making the AVN Hall of Fame in 2006 and being inducted into XRCO Hall of Fame in 2013.

Before adult, he was a musician and still continues to make music, including his recent EDM track entitled “Only with the Lights Out” and his highly original renditions of other people’s songs that he posts to his YouTube page http://www.youtube.com/dpmusic100.

Back in the early 80s, he produced two disco hits by an artist named Salazar. He’s produced an album of Meredith Brooks (famous for her song “I’m a Bitch”), in addition to working with jazz great Kenny G and rapper Sir Mix-A-Lot. In 1985, he wrote, arranged and produced a charity record in the same vein as “We are the World” called “Give Just a Little,” featuring local celebrities performing to raise money for the local food banks.

Moore’s official mega site also includes Rodney’s music, trailers, live cams and much more. Keep up with everything Rodney Moore by following him on Twitter @rodneymoore22.