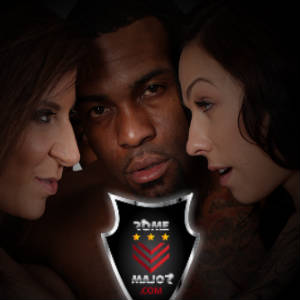 (Las Vegas, NV) August 1, 2017 – Rome Major, Vicky Vette and Sara Jay are happy to announce the launch of Major’s new Official Site – RomeMajor.com – with the popular VNA Network. It is the second site developed from a partnership on new sites between the VNA and Sara Jay’s WydeSyde Productions (NinaKayy.com being the first).

Major’s site has a new tour, promo video and members area, is 100% mobile friendly (members can watch and stream any of the content and free daily live camshows on their phones), with a member’s area packed with exclusive content including Major’s best hardcore, interracial, and group sex scenes. Major is also planning on performing live shows for members.

“I am very excited to start a new chapter in my life and it’s awesome to have people behind me as I make a bigger push in adult,” says Major. “I am working closely with Sara Jay with my career and having a site with the VNA raises the bar. Expect big things and lots of #majorwork.”

“I’ve been working and shooting Rome for a number of months,” says Sara Jay. “My company, Wyde Syde, is expanding our internet presence in the coming months and helping produce his new site made a lot of sense. Rome is an energetic, dedicated and reliable performer. I look forward to watching his career and site grow.”

“Rome somehow skipped being a private in the Vette Nation Army and is a Major!” says The VNA Network’s Vicky Vette. “It’s been a very big month for the VNA’s new partnership with WydeSyde. We added websites for Rome and Nina Kayy and are hard at work on a couple more projects with Sara Jay. The VNA is now up to 34 sites and we have no plans of slowing down.”

Major can be followed via Instagram: @romemajor, on Twitter @RomeMajorXXX and contacted directly on Verified Call: https://verifiedcall.com/profiles/RomeMajor.