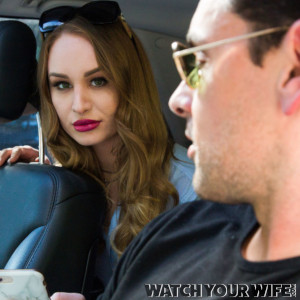 (Hollywood, CA) March 25, 2019 – Award-winning leading man Ryan Driller has a brand-new Naughty America scene. In “Watch Your Wife Featuring Daisy Stone & Ryan Driller”, he’s driving an Uber and gets a bigger tip than he ever imagined.

After he picks up fare Daisy Stone, Ryan’s character enjoys her company and getting to know her. When they pull up to her house, she invites Driller in to come hang out with her but discloses she has a husband. Then, she tells him her husband likes to watch. Stone snaps a pic of Ryan’s junk to get her husband’s approval. Driller is  invited in, and immediately heads to Stone’s bedroom for their tryst, which is hot… and somehow, her husband remains silent through it all.

“Watch Your Wife Featuring Daisy Stone & Ryan Driller” is shot in 4K HD available now on both the Naughty America and Watch Your Wife websites. The trailer and exclusive, 46-minute scene, and over 300 photos, are at https://www.naughtyamerica.com/scene/daisy-stone-fucks-her-driver-while-her-husband-watches-25235.

“Getting to have sex with a hot passenger like Daisy is every Uber driver’s wet dream, and one incredible tip,” says Driller. “The scene has some really great build up, and we had amazing chemistry, which makes it that much hotter.”

Ryan has almost 250 scenes on Naughty America’s network – and webmasters can promote them all at https://www.naughtyamerica.com/pornstar/ryan-driller by signing up with the NaughtyRevenue affiliate program.

No spam, notifications only about new products, updates.
PrevPreviousThe Second WTF Summit Russia To Be Held In Sochi
NextYNOT Announces Cammunity Event for Webcam and Clips ModelsNext
On Key