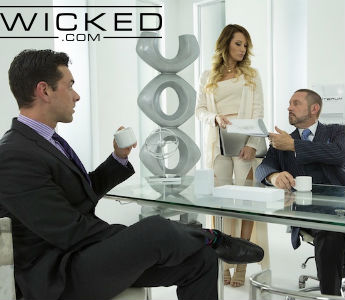 Directed by Brad Armstrong, DNA is a futuristic tale of a company that has the ability to bring back loved ones who have passed away – the bereaved get closure by reuniting with their loved ones via cloning.

The 2-disc DVD, released two weeks ago, is now available online, and is sure to turn heads this awards season.

“Working for Wicked is always amazing,” says Driller. “With all the amazing talent, a creative script, and Brad’s incomparable directing, DNA will definitely be a hit with the fans and critics and more than likely take home some major awards. I’m honored to have been part of this incredible project!”

Webmasters can promote DNA and other Wicked Pictures through the Wicked Bucks affiliate program.

Ryan will also be part of Team Wicked for AIDS Walk Los Angeles on Sunday, October 23rd. He is walking and raising funds to support AIDS Project Los Angeles and AIDS Walk LA.

Donate at https://la.aidswalk.net/RyanDriller and make a difference.

He’s been nominated for countless XBIZ, AVN, NightMoves, Inked Awards, and XRCO Awards. Ryan won the XBIZ Award for Male Performer of the Year and an additional six trophies for his scene work. Ryan has also scored a NightMoves Awards win for Fan’s Choice for Best Male Performer.

After 10+ years of hard work, he scored his own Fleshlight in 2018 and became part of the groundbreaking Fleshlight Men’s adult star lineup of toys.

Ryan has been a mainstream media favorite and has been interviewed by Men’s Health, The Hype, Vice, Daily Beast, Mel Magazine, and Mic.com, as well as featured in an editorial spread with Sasha Grey for BlackBook. His movie stills have appeared in Penthouse, Cheri, and Hustler.

Before entering adult, Ryan acquired a resume of jobs that prepared him for feature roles, including lifeguard, bartender, boat captain, and radio station promotions/DJ. When he’s not saving the world or flexing his muscles on screen, you’ll find him at the beach, hiking, or hanging out with his dogs. Make sure to keep up with everything Ryan by following him and his sharp wit on Twitter @ryandriller and see his life in photos at work and play on Instagram. Fans can buy his number and call or text him on Dream Lover at http://www.dreamlover.com/RyanDriller.

To interview Ryan Driller for your site, publication or show, contact Erika Icon of The Rub PR at erika@therubpr.com.