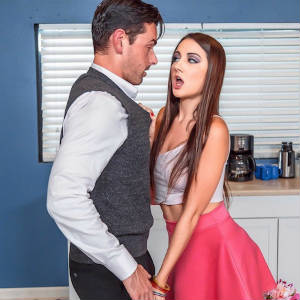 In Wild Teen Talk Show, Driller plays Dr. D., a parody of Dr. Drew with some Jerry Springer action sprinkled in for extra drama. The topic for the show is wild teens and their families who just can’t take it anymore. Eighteen-year-old Lacey (played by Lily Adams) is a white trash slut who dropped out of school to become a stripper and has had sex with over 200 guys. Her and her mother Joyce appear on the show, but few answers are found to settle their issues they’re having with each other. After the show, Driller goes backstage to talk to talk to Lily and the lines between professionalism and curiosity are blurred, when the two end up having sex. Watch the trailer and scene at https://www.digitalplayground.com/flixxx/trailer/1880530/wild-teen-talk-show/.

“All those hours watching tabloid talk shows weren’t wasted—I was able to call upon them for my new DP scene,” says Driller. “Dr. D is like Dr. Drew with some Jerry Springer and Joey Greco from Cheaters mixed in. It was a fun role to play and parody, and definitely hard not to laugh at times. It’s funny, sexy, and definitely worth watching.”

Driller also has multiple scenes on Naughty America, including a new scene on their My Sister’s Hot Friend site. Ryan finds his sister’s friend hot ebony babe Jenna Foxx lounging on their couch. Once Jenna shakes her huge naturals in Ryan’s face, he follows her into the bedroom, and they find out they have a lot more in common than they thought. The scene and trailer are available at http://tour.naughtyamerica.com/scene/jenna-foxx-22927?nats=4.4.8.8.1169.0.0.0.0.

Webmasters will have to wait for Driller’s solo site (if ever he has one), but can still profit from his Digital Playground productivity by joining the AdultForce affiliate program, while of course Naughty America lets affiliates earn some might NaughtyRevenue.