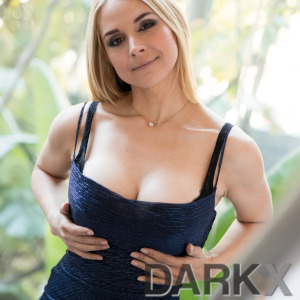 (Hollywood, CA) April 22, 2019 – Sarah Vandella is going to wow her fans with her acting skills and on-screen performance playing a blind woman in her new DarkX scene “Feel Me, See Me”.

Rob Piper shows up at her door very self-assured and excited, but is completely shocked when he sees her cane and glasses. Once they get comfortable he says, “You really can’t see can you?” and she says no. She feels his face to see what he looks like. Sarah will really make her fans believe she’s really blind with a stellar performance in the role – not even for a second does she get out of character as a blind woman when she’s giving one of her world-famous BJs to Rob or taking every inch of him.

The “Feel Me, See Me” scene is beautifully filmed, in the cinematic style director James Avalon is known for. The trailer and exclusive scene are on DarkX’s official website at https://www.darkx.com/en/video/Feel-Me-See-Me/146826.

“I’m so honored to have been in this scene,” says Vandella “The wonderful James Avalon hand-picked me to perform as a blind woman. It was such a special connection that I had with Rob Piper, and I really hope the fans love it as much as I did!

“Playing a blind woman was a really interesting experience that allowed me to see through my body instead of my eyes. Thank you, James, for having me in your movie. And thank you, Rob, for the awesome connection.”

Vandella can also be seen in two new all-girl titles. Zero Tolerance’s Is It Wrong She’s My Stepmom Volume 3 has her playing Kate Kennedy’s stepmom – their cougar/kitten scene is one of the hottest on the DVD – and in Sweetheart Video’s Lesbian Adventures: Older Women Younger Girls Volume 13 she plays a woman who finally experiences love with another woman as she unexpectedly falls for babysitter Emma Starletto. Both titles are available on DVD and VOD through adult e-tailers like Adult Empire and Gamelink.