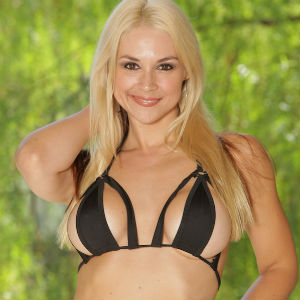 (Hollywood, CA) Blonde bombshell Sarah Vandella has had an amazing year and the XBIZ Awards has recognized her hard work with two prestigious nominations.

“I would like to thank XBIZ for two incredible nominations,” says Vandella. “I’m not only honored but also really happy that my hard work this year has been recognized, along with my acting abilities. I’d love to win one or both!”

The XBIZ Awards are set to take place on Thursday, January 12th, 2017 at the Westin Bonaventure Hotel in Los Angeles and will be hosted by the infamous Ron Jeremy. More information about the awards can be found at http://xbizawards.xbiz.com/.

Webmasters can promote Vandella across many sites by signing up with the Premium Cash affiliate program.

Vandella has had cherry mainstream roles, including the comedy/horror flick Werewolves in Heat released in 2015 and the 2012 Indie film Mancation. In 2015, she was cast in the breakout role of reporter Maggie McCormick in Adam & Eve’s original new comedy Love, Sex & TV News, earning her multiple Best Actress nominations.

Keep up with all her adventures and become a Vandella Vandal by following her on Twitter @mssarahvandella, see her life on and off set on Instagram @legit_sarahvandella, talk and text her on Dreamlover http://www.dreamlover.com/SarahVandella and join her Only Fans https://onlyfans.com/sarahvandella (or promote the page with the Only Fans Referral program).

Vandella has also since revamped, re-amped, refreshed and relaunched her own official home site, SarahVandellaVIP.com, via the PUBA Network.

Get Sarah Vandella on your set by contacting her talent manager Mark Schechter of ATMLA at mark@atmla.com or 818.825.1239.

To interview Sarah Vandella for your site, publication or show, contact Erika Icon of The Rub PR at erika@therubpr.com.