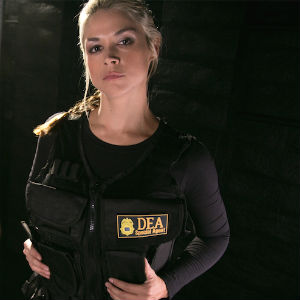 Sarah Vandella plays a DEA Special Agent in Part 1. In that scene, Vandella shows her acting chops, but it’s not until Part 3 that we actually get to see Agent Vandella ravage Mexican hostage Kat Dior inside a cartel facility. It all leads up to this, and if you’ve been waiting the whole series, the scene is highly anticipated.

Dior,naked and handcuffed, offers herself up to Agent Vandella to save her life and see her daughter again. Vandella yells at her for even the mere suggestion she’s a lesbian – but weighs her options while cupping Kat’s breasts, as Dior promises her the orgasm of her life. Once the cuffs come off, it’s on. The hot sex is something you don’t want to miss and at the end’s””’, we find out if Vandella does the right thing and releases Kat.

“I hope my fans have been watching the whole series. I was in Part 1, but there’s amazing storyline you have to see to understand the final scene, in Part 3,” says Vandella. “It was amazing working with Kat, Alan, and all the ladies who starred in the mini-series. Please make sure to give both of my scenes in the series a thumbs-up, if you want to see a lot more of me on Girlsway.”

Click the following to view the trailer and full scene from Part 3 of Extradition.

If you’ve missed any parts of the series, watch Part 1 of Extradition here and Part 2 here.

Webmasters interested in promoting Extradition and Girlsway’s impressive content should join FameDollars, and Vandella’s own SarahVandella.com can be promoted via PremiumCash.com.

No spam, notifications only about new products, updates.
PrevPreviousGet Ready for Seven Trans Hotties Blowing & Banging
NextSavana Styles Is All in Alyssa in New Reality Kings SceneNext
On Key